College Baseball RPI - Winning isn't everything, it's only 1/4 of the thing 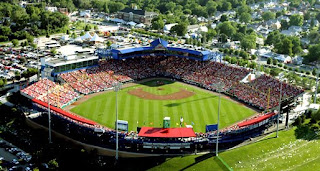 Baseball America reporter Aaron Fit recently wrote about a proposal from University of West Virginia Baseball Coach Greg VanZandt to change the college baseball Ratings Percentage Index (RPI). The proposal calls for increasing the value for winning a game on the road while reducing the value of a win at home. This is similar to the college basketball RPI changes instituted a few years ago.
The proposal is a positive step, but the changes will still leave the RPI well short of an ideal tool to assist in NCAA post season selection because the primary factor to which the change is applied (winning percentage) is under weighted - thus any increased value is minimized. Here's why:

So what's the problem?

There are many, but in a nutshell, 75% of the RPI is a measure of strength of schedule (your opponents' win percentage, and your opponents' opponents' winning percentage), which may or may not tell you the quality of a team. The RPI provides a strong measure of very good teams from better conferences. Its weakness is making meaningful distinctions between teams who are "on the bubble" come NCAA Tournament selection time.

Because the RPI emphasizes who you played over how you performed, weaker teams in the major conferences benefit while strong teams in weaker conferences appear less worthy of inclusion in the tournament.

Which brings us back to the original proposal - providing more value for a road win and less for a home win. How much difference will this make?

To some extent I agree with NCAA statistics guru Jim Wright who believes the change will make very little difference because, "if you're a good team, you're still winning the majority of those games anyway." This is indeed true.

What Wright doesn't add is that regardless of who wins, the difference will be small because the RPI understates the value of winning and over-emphasizes the record of your opponents. The weighting of the RPI is such that the majority of the benefits from this change cannot begin to overcome the three times greater emphasis on who you and your opponents played as compared to how you performed against them.

Under the current system, if you had an undefeated season, the maximum RPI value would be .2500. Under the proposed formula, an undefeated season played entirely on the road (a winning percentage of 1.250 multiplied by the same .25 weighting) results in a maximum value for win percentage of .3125 - a difference of .0625. But this "improvement" diminishes rapidly when applied in real life for a number of reasons -

Greg VanZandt deserves credit for his proposal and its rational, well documented approach that would change an old saying to "Its not whether you win or lose, its where you play the game."

Further, this is a proposal that should be adopted by the NCAA Baseball Committee, because it uses well reasoned math and it would represent an acknowledgement of the inequity faced by teams due to geography while answering critics of the current RPI. But there is little chance this will significantly alter the RPI rankings. For it to have meaningful impact, greater emphasis on a team's actual winning percentage in the RPI is needed - in this case valuing a team's winning percentage as .33 of the calculation instead of .25, a shift of just 8 percentage points. The 8 percentage points can be taken from the weighting for the opponents' opponents' winning percentage, placing the majority of the emphasis in the RPI where it should be, on who you played and how you performed against them.

Skeptics will contend that this will simply encourage teams to play a weaker schedule in order to pad their win percentage and make the RPI less valuable. While that might be possible, could the "padding" that skeptics cite really be worse than what is currently occurring in the Duke and Virginia examples cited above or among many other teams with similar scheduling patterns?

Vince Lombardi said "winning isn't everything, it's the only thing".

Under the current RPI formula, "Winning isn't everything, it's only one-quarter of the thing." The proposal from Coach VanZandt presents a perfect time to analyze additional data and make another meaningful change that will value winning more - for the benefit of college baseball.