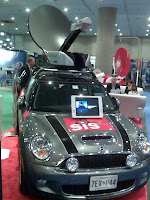 Goprincetontigers.com and its sister site goprincetontigers.tv were my focus as a panelist discussing "Online Digital Success Stories" at the Content and Communications World Exposition (CCW Expo) that wrapped up today in New York City.  CCW Expo is a trade show that is primarily focused on the technology necessary for television and internet broadcasting.  Fellow panelists included leaders from NHL.com, horse racing (hrtv.com) and TV Desi, a television distribution company from southeast Asia.  Chris Wagner from Neulion served as the moderator.


The key messages from the session were:

Indeed, we can all become instant mobile television networks.  You're little more than a camera and satellite dish away.  You just have to take it out of the back seat.

Email ThisBlogThis!Share to TwitterShare to FacebookShare to Pinterest
Labels: Technology