Are fines further evidence of student athletes as employees? 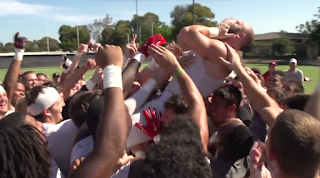 The recent revelations that Virginia Tech and Cincinnati considered reducing cost of attendance stipends for violations of team or department rules has brought significant media discussion that "fines" are further evidence student athletes are essentially employees.

Ultimate Sports Insider has previously described  the amateur vs. professional debate as a distraction from a more important topic - the education of student athletes.

"Stipend" is the commonly used term  regarding the additional monies student athletes receive.  A stipend is defined as "a fixed and regular payment such as a salary for services rendered or an allowance."  Those who describe student athletes as employees will focus on "services rendered."  Those who view athletics as part of an educational experience will likely consider these payments similar to an "allowance."

Consider the analogy of a parent who provides an allowance to their children. There are many reasons to provide an allowance (stipend): to learn the value of money, to make personal spending decisions, to learn about saving, and/or as payment for work around the house (e.g. mowing the lawn) are some obvious examples.  All of these reasons have educational value and teach different lessons.

Withholding allowance is a common form of discipline (among many options such as grounding, no television, taking away a cell phone, etc.).  If you use allowance as payment for services, failure to do your work means you don't receive your payment, yet no one would suggest that the child is an employee if a parent made such a decision.  Other families might never withhold allowance, or only consider doing so if they believed it was the most appropriate or effective way to improve behavior.

As parents of two boys, my wife's and my personal philosophy is that withholding an allowance is not a form of discipline we have chosen because we have more effective means for discipline and because allowances for our children are not tied to work.  Our boys regularly and freely contribute to the family because all of our gifts are required for our family to be cohesive and successful.  They have a responsibility to help our collective good.

As an athletic administrator, I don't view withholding a stipend as a valuable form of discipline for the same reasons - the stipend isn't tied to work and I believe there are more effective means.  But to completely eliminate the possibility that a student athlete could ever receive a smaller stipend - especially a nominal amount that would have hardly any impact on their financial situation but would help make them have better personal discipline or advance towards graduation and a degree - is no more thoughtful than posting a series of "one-size fits-all" fines on the wall and reducing stipends without any creative thought.

Ask any coach and they will tell you that each student athlete has different personalities and motivations.  Some people are intrinsically motivated and respond to positive reinforcement and some people respond better to disciplinary approaches.  Both types of reinforcement have value when used appropriately.  To ignore this reality is doing student athletes, coaches and administrators a disservice.  Coaches frequently increase financial aid for student athletes who perform well athletically, do the right thing academically and are good teammates.  Take a minute and watch the video of Stanford, walk-on linebacker Craig Jones being awarded a scholarship in front of his entire team.  When is the last time your "employees" reacted to anything the way his teammates did?

Interestingly, no one ever suggested that awarding the previously voluntary efforts of a student athlete was now evidence that he suddenly became an employee - perhaps because it didn't fit a simplistic or predetermined narrative about college athletics.
at 2:00 AM