As the news related to athletic budgets continues to pile up and difficult financial situations are faced by many across the country, some campuses have begun to question the place of athletics compared to other priorities that are considered "core" to the educational mission of a college or university. 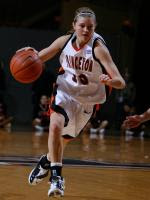 Jessica Berry, a starting senior guard for Princeton Women's Basketball, is an English major from Little Rock, Arkansas. The message below (reprinted here with her permission) was in an e-newsletter sent to supporters of the Princeton team. Although its original purpose was to provide an inside perspective on the team, it responds to the question, "Why does athletics matter?" I hope you'll enjoy her writing, which demonstrates the educational value of athletics and likely provides a voice for many student athletes.

It’s Sunday at about 4:15 AM, and I’ve had quite enough tossing and turning. I need a book, but nothing thesis-related—or school-related, for that matter. And it can’t be too happy. I need a book because I can’t sleep, because I keep replaying our overtime loss to Dartmouth, our nine-point loss to Harvard in my head, over and over. I see myself missing a free throw, missing a three-pointer, putting a little too much on a pass. It’s painful—a maddening montage of missed opportunities, and I’m in need of escapist fiction. Sherlock Holmes, Elizabeth Bennet... something.
Choosing Sports Illustrated writer Gary Smith, I’m really not escaping. But when my journalism class interviewed Smith last December, the 4-time National Magazine Award-winner said something that stuck with me—something about the necessity of searching for the true nature of sport, for the reasons the players play their chosen games. In the midst of my montage, in the midst of my last season and my last semester as a collegiate athlete, this is an investigation I need to undertake.
"The Boys on the Bus," page 38 of Going Deep: 20 Classic Sports Stories. Smith takes his son to a Summerville-Stratford football game three days after the 9/11 terrorist attacks. Why should high school football resume so soon after such devastation? How could a game-clock tick as time stood still for millions of Americans, for millions around the world? ABC’s Nightline replayed a montage of images more nightmarish than my missed shots could ever, ever deign to be, be they million, trillion-fold.
So why lose so much sleep over basketball? Why play on this team of 14 girls, of 14 athletes who love the game and play their hearts out? Who, even after a two-loss weekend, arrive early for 8 AM Monday lift, ready to spend over 20 hours this week at Jadwin gym?
The answer for both Gary Smith and for me is magical realism. As author Gabriel Garcia Marquez sees the novel form, sport can be seen as a safe space for the illogical within the logical, as an abnormal realm where the magic of a competitor’s passion is not only sanctioned, but also given agency and meaning. The Summerville-Stratford game was a solemn affair, but the fans did cheer, the band did play. Summerville Sophomore Tyler Horat capped an 18-play march with a 1-yard touchdown run in the first quarter, but the play was called back; Stratford scored three times in the third to win the game and move up one spot in the 5AAA conference standings. And three days after a national tragedy, it somehow mattered, though the teams, the parents, and the referees knew it didn’t really matter at all.
There are other things going on in the world besides Princeton Women’s Basketball. House and Senate leaders today approved a $789 billion economic stimulus bill; last week, Palestinian militants fired mortar shells from southern Gaza and Israel carried out an air strike against members of the launching squad. Personally, I’ve been mourning the death of a friend, worrying over the surgery of a family member, and making plans for post-Princeton life.

But as we put on our orange and black jerseys, the magic of basketball can take the “real” and infect it with the arduous rhythm of a pre-game clap, with the roar of a bench-wide cheer. Each possession of a basketball game is a page being turned, a magical realism novel in the making. Eyes in the stands and on the sidelines move back and forth, following the ball like lines on paper. So with 2:54 left in the second half, when I dribble off my foot and the ball goes backcourt for a turnover, it matters, though I know it doesn’t really matter. And with 1:34 left in the first, when I pass to Addie Mircir and she knocks down her third three pointer of the night, it’s magical, yet it doesn’t really matter at all. It matters because, to us, it matters; we don’t expect to grace the February 16th cover of Sports Illustrated, but we do expect high fives from teammates. We expect to be helped up after taking a charge or diving after a loose ball.
I finish my chapter of Gary Smith, and, remembering the nature of my love for sport, I sleep. I sleep knowing I need my rest for Monday, for a new week of practice and preparation for Cornell and Columbia, for 21 more practices in my college career and at least 11 more games as a member of this magical team—who knows, maybe more? Anything can happen in a Garcia Marquez novel, and anything can happen in Ivy League conference basketball.
at 10:28 AM